Everyday across the country, good people are working tirelessly to ensure the world as we know it keeps on spinning. From local police and firefighters to maintenance teams and inspection personnel, departments are working around the clock to ensure we as a nation can both figuratively and literally keep the lights on.

But in these unprecedented times, the toughest teams need the smartest and safest technology on the market to take their service to the next level.

To meet this need, DJI just released their most intelligent, durable, and comprehensive drone to date. 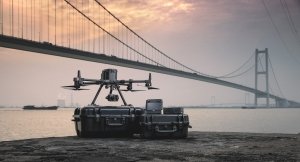 The Matrice series hasn’t been significantly updated since the 200 back in 2017, so if you were wondering what new technological wonders DJI has conjured with the release of their newest addition to the series, you’ve come to the right place.

The Matrice 300 RTK boasts some of the most impressive flight performance stats we’ve ever seen in an enterprise level drone. For starters, it supports a whopping 55 minute flight time – nearly double the flight time of current UAVs on the market. But that’s only the beginning. 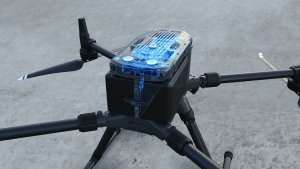 These sensors appear on all 6 sides of the drone as opposed to the usual four, giving the M300 an impressive 40m detection range and autonomous collusion control not seen in the market today. These sensors provide flight, navigation, and obstacle data directly to DJI’s new primary flight display, granting user-friendly situational awareness for pilots in conjunction with its automatic sensory systems.

The new UAV also sports a controller transmission range of 15 km (approx 9 miles), guaranteeing pilots a much larger circumference of work to take advantage of that 55 minute battery flight time.

But no matter the flight time, performance can be interrupted when batteries need switched. Typically, switching batteries shuts down UAVs completely, which then requires you to reboot your flight paths and systems along with the aircraft. However, the M300 comes with hot-swappable batteries that keep your drone on while you switch out its power source.

Along with waterproof IP45 technology and a bevvy of accessories that put third-party manufacturers to shame, the long-awaited update to DJI’s Matrice series puts the Matrice 300 RTK substantially ahead of all other drones in its class when it comes to flight performance.

However, a drone isn’t just for flying – it’s for capturing data. So how does the new M300 hold up in terms of producing quality inspections, surveys, and service capabilities?

The good news is that the M300’s payload capabilities are top of the line, beating nearly every other standard camera payload offering in the aerial market. The bad news is…well, there isn’t any.

The Zenmus H20 series camera is an optimal match for this top-of-the-line drone. By using a combination of a 12MP wide angle camera, a 20MP 23x optical zoom camera, a thermal camera, and a laser range finder all in one payload, the Matrice 300 RTK offers the most comprehensive service offerings we’ve ever seen in a single payload. 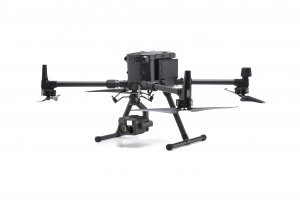 What does that mean in terms of service capabilities? It means that, combined with the Matrice 300 RTK’s unmatched flight performance technology, the Zenmus H20 camera payload setup offers unprecedented productivity for a wide variety of in-field applications. For example, the M300 will minimize repetitive work by automating routine missions with AI spot-check. With it, you can mark an object of interest with the press of a button. From that point on and in future flights, the drone can automatically replicate the framing, angle, and height of your object. That means that routine inspections of cell towers, power plants, and more can be initiated with minimized redundancy and maximized efficiency.

But that’s far from the limit of this drone’s payload capabilities. It can also support 3 different payloads simultaneously. This can be advantageous for firefighters and police needing to outfit their drone with speaker systems, spraying capabilities, and more.

On top of that? Aerial points of interest can be immediately synchronized with ground control teams to pinpoint subjects of interest by instantly sharing the precise location data of the marked subject. The drone also comes standard with a UAV health management system, a primary flight display, and smart inspection software to minimize convoluted flight routes and maximize your data efficiency rates.

In a world that’s progressively demanding more and more from society and our service workers, the DJI Matrice 300 RTK might just be the most significant technological advancement in the drone industry. So far in our tests, it has not only met but surpassed every expectation of what a drone can do and how well it can do it.

Want to learn more about what this drone can do for your team? Contact us at 833.424.7957 and a member of our team will break-down how your department can work safer, smarter, and more efficiently with the power of the M300 at your fingertips.

The future is here, and this time, the sky is no longer the limit.

Want to join the discussion?
Feel free to contribute!

Building A Better Future, Together

Buying VS Leasing Your UAV
Scroll to top