This week DJI unveiled it’s new flagship enterprise drone, the Matrice 30 series aka the m30. This drone has many new features that will make inspections, surveys, and public safety easier than ever.

The m30 has up to three available cameras, an fpv camera, and a laser range finder included in a new foldable design more akin to the consumer Mavic series of DJI drones. This makes the m30, one of, if not the most portal drone in it’s class.

The m30 comes in two versions. The m30 and the m30t with the “t” meaning thermal. The main different between the m30 and m30t is the additional high definition Uncooled VOx Microbolometer thermal camera and laser range finder. While this new Matrice has a much smaller footprint than previous models it manages to pack in many more features.  Read more about the new features below. 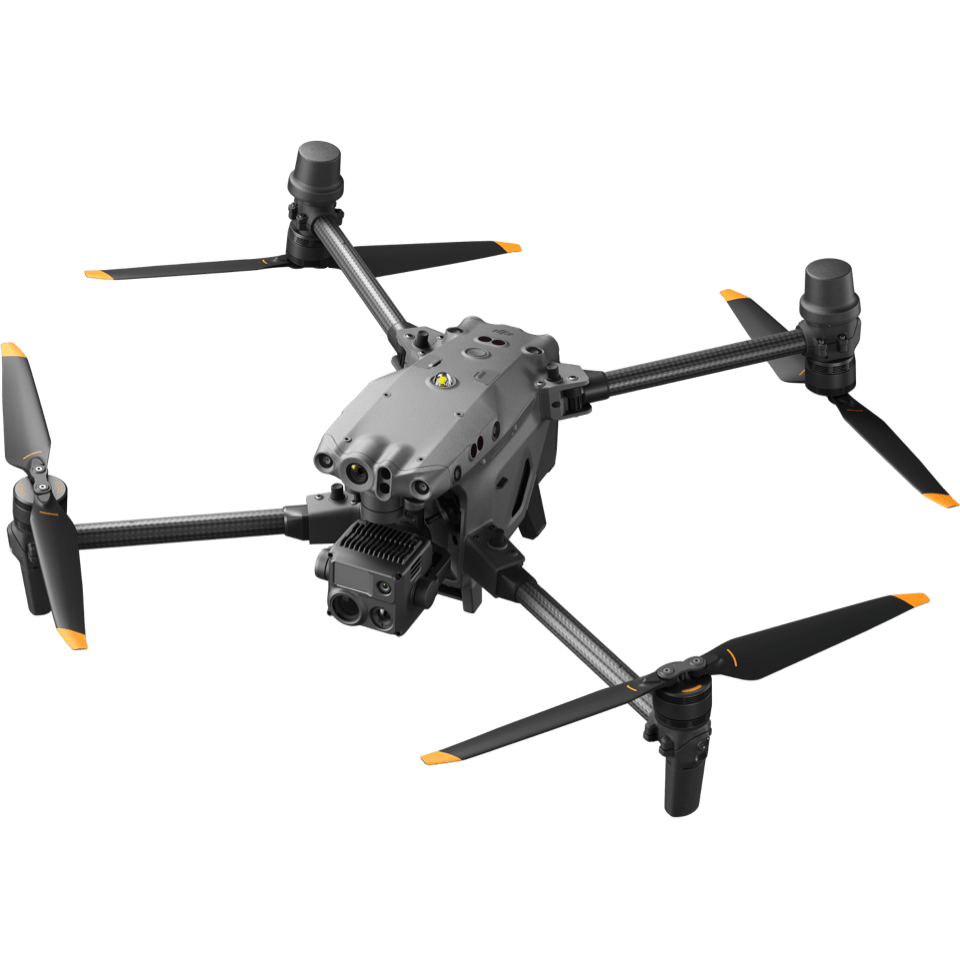 The first, most noticeable, new feature on this enterprise drone is the new camera array mounted to the gimbal. This array features 3 cameras, a wide lens, a zoom, and thermal camera; as well as a laser range finder. There is also an additional FPV camera located on the body of the drone to give a constant monitor of what direction the drone is oriented. Here are the specs on those cameras.

With the addition of the new cameras we have OcuSync 3 which is DJI’s new video transmission system which enables simultaneous transmission of 3 separate video channels. Not only does the new transmission system allow for multiple video channels, it allows for multiple device connections. This let’s multiple pilots collaborate on drone flights both locally and remotely. This can be incredible helpful in the field when you need to hand off control to another operator when flying complex missions.

This new DJI Dock can run 24/7 rain or shine allowing the m30 to land, recharge, and return to your mission. The dock enables you to fly missions programmed in DJI Flighthub 2 and features a Wide-angle Security Camera, Integrated Weather Station, Internal Omni-directional Antenna, RTK Module, and a Edge Computing Expansion Slot.

This new Dock system makes working in any environment easier than it’s ever been. The dock has features such as a battery cooler to fast charge the batteries from 10-90% in 25 minutes. It also operates in temperatures between -31 and 90 degrees Fahrenheit, and incorporates a 5 hour battery backup system. This solution could be delivered to a site pre-programmed on Flighthub2 to launch and carry out a mission. This new solution also offers API integration allowing for customer development and operating from private servers for sensitive data collection operations and custom applications.

This new enterprise drone package has everything you could need, rather you are in public safety, energy, construction, or any industry that requires a sturdy feature rich drone solution. There are two packages, the m30 and m30t, with the m30t also including a thermal camera and laser range finder. Both drone packaged come with the DJI RC Plus flight controller, two TB30 Intelligent Flight Batteries, one BS30 Intelligent Battery Station, and the aircraft storage case.

This drone will be available later this year with pre-orders starting soon. Sign up for our newsletter for the latest news about this and other upcoming drone news and information.

Everything You Need To Know About FPV Drones